Watford have been one of the big talking points of the Premier League campaign so far this season.

A 2-1 home win over Tottenham on Sunday means that Javi Gracia’s side has played four and won four games in the top-flight prior to the international break.

Javi Gracia is part of the success

Watford seems to change managers on a whim. To be fair not all of the bosses who have left the club have been fired. The last head coach Marco Silva fancied the Everton job and took his eye off the ball.

Results slipped and the Hornets dismissed the Portuguese boss and appointed Spanish boss Javi Gracia. The 48-year-old arrived as a relatively unknown quantity to your average English football fan.

Last season the Hornets results were mixed under Gracia. However, he did arrive during the middle of the campaign. He has now had a full pre-season to work with the players and the team seems to have benefitted greatly from the time.

A few of the Watford players have stood out this season, including Greek international full-back Jose Holebas and Argentinian playmaker Roberto Pererya. The pair have been the pick of the Hornets players, while veteran striker Troy Deeney has also started the season in good fashion.

Holebas has produced a respectable four assists in the top-flight this season, while Pererya has weighed in with three goals in four outings. The latter is starting to show the class that persuaded the Hornets to stump up big money for his signature.

Deeney’s experience has been vital in Watford’s stellar campaign so far this season. The experienced forward has scored twice and produced an assist, but more importantly has been a focal point of the team’s attack.

Watford can avoid a relegation battle

Watford are currently sitting third-place in the Premier League table, level on points with league leaders Liverpool and Chelsea. It seems highly unlikely that the Hornets will keep up their strong form. If they do then they truly will be the story of the season.

The Hornets primary aim at the start of each season of late has been to avoid relegation. Their stellar start gives them a good chance of avoiding the relegation dogfight this season.
I doubt anybody at Watford is getting carried away by the team’s present form. However, they will be enjoying their team’s relative strong form and hoping that it continues after the international break.

What are Watford’s realistic ambitions for this season? 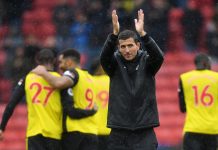