The European football season is close to an end and the summer rumour mill is cranking up, as teams across Europe look to strengthen their squads for next season.

Here are just two of the stories doing the rounds in the European media:

According to France Football, Arsenal are holding talks to sign Lille forward Nicolas Pepe this summer. However, the report suggests that the Ivory Coast international may prove too expensive for the budget conscious Gunners.

Pepe has been one of the standout stars for his French club, who have surprised everybody by all-but sealing a Champions League spot in Ligue One for next season.

The French publication claims that the team from north London will turn their attention to Bournemouth’s Scottish winger Ryan Fraser and Ajax’s Brazilian star David Neres. Both players would likely be more cost-friendly than Pepe, who could is likely to be in demand this summer.

Manchester City are set to clinch the £47million signature of Sporting Lisbon midfielder Bruno Fernandes, who has been consistently linked with a move to the Citizens arch-rivals Manchester United.

Fernandes has a buy-out clause of around £86million. However, City are confident of completing a deal, with the idea of the Citizens allowing players to join the Portuguese club as part of the transfer.

The 24-year-old has been in sensational form this season for Sporting, scoring 19 league goals and also producing 11 assists in 31 Primeira Liga matches. Prior to the start of this season, Fernandes was already highly-rated, his stellar form has only intensified interest in the star.

The same report also claims that City are prepared to meet the £60million release clause of Atletico Madrid midfielder Rodri this summer. The Citizens are desperately in need of an alternative and long-term replacement for Brazilian veteran Fernandinho, who recently turned 34. It seems that City believes that the Spaniard is the man to replace the midfielder.

Will Manchester City sign Fernandes and Rodri this summer? 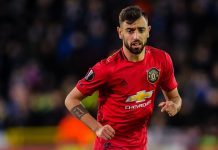