The appointment of Gareth Southgate as England boss in 2016 was not a popular one amongst fans.

The 48-year-old was considered a dull, FA yes man by many. However, the former Middlesbrough boss now looks to have been a shrewd appointment.

Southgate’s development as a boss is encouraging. One of the most positive aspects of his reign so far has been blooding the country’s younger players.

Refreshed the squad with inexperienced players

Prior to his appointment, there was apathy towards the England team. It was same old same old under the previous bosses. There was a sense of massive underachievement for the players available to the national team.

Southgate came in and slowly but surely, he has refreshed the team by bringing in new players. To a certain extent, he ignored reputations and picked the players he believed would do the best job. This was a novel concept for an England boss.

Promising youngsters have emerged this season

A number of promising English youngsters have emerged this season. Three of those players, Declan Rice, Jadon Sancho and Callum Hudson-Odoi are in Southgate’s latest squad.

According to media reports, Sancho will start, while the others may well make cameos in Euro 2020 qualifiers against the Czech Republic this evening and Montenegro on Monday night.

The days of apathy surrounding the England team seem to have disappeared for now. This is mainly due to the fact that England are actually exciting to watch once again. The Three Lions journey to the World Cup semi-finals last summer reignited the fans love of their national team.

Looking at the current squad the future of the England national team looks promising. The country’s promising youngsters look set to play a big part in the England team for a long time to come.

Will England’s promising youngsters feature against the Czech Republic or Montenegro? 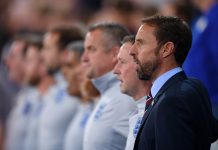