Rodriguez believes that “a club like Bayern must be looking to win” the Cham-pions League.

“The Champions League is a very difficult competition but a club like Bayern Munich must be looking to win it,” said the Colombian international, who was speaking to reporters at an Adidas event in Berlin.

The Bundesliga giants face Benfica, Ajax and Greek outfit AEK Athens in the group stage of this season’s Champions League. 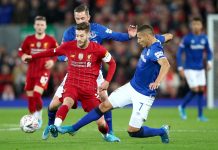