Cardiff City suffered a 1-0 defeat at already-relegated Fulham on Saturday, a loss that could prove fatal to the Welsh side's chances of surviving the drop.

Neil Warnock’s side are now four points behind 17th place Brighton, who picked up a 1-1 home draw against Newcastle last time out.

Cardiff have punched above their weight

In reality, for Cardiff to still be in the fight for survival at this point of the campaign is all credit to the players and wily boss Warnock. The Welsh side were the favourites to suffer relegation at the start of the campaign after their surprise promotion last season.

The Bluebirds achieving promotion to the top-tier was a big achievement considering the quality of players available to Warnock, who has developed a reputation as a promotion expert during his career.

They understandably aired on the side of caution in the transfer market in the summer, not spending big by Premier League standards. Most connected with the club may have feared that they would only spend one campaign in the English top-flight. The concerns were understandable taking everything into account.

Cardiff still have a chance of surviving the drop this season. The fact that rivals face Brighton face a trip to Arsenal before a home game against reigning champions Manchester City on the last day of the season gives the Bluebirds hope.

The Seagulls may not pick up any more points this season, as both their remaining opponents are still battling to achieve their respective objectives for the campaign.

However, one of the main problems for Warnock’s side of late is the fact that their recent form in the top-flight has been poor. The Welsh side has lost five of their last six matches in the Premier League.

The Bluebirds host Crystal Palace at home in their next game. Only a win will be enough to keep their survival hopes alive. However, unfortunately for Warnock and his team, it seems the odds are against them surviving the drop.

Can Cardiff beat the drop this season? 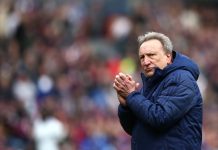 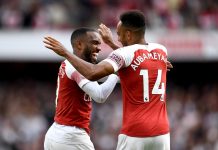 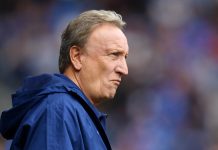 Cardiff are not good enough for the Premier League