Here are two of the stories that have caught our eye from today’s media:

According to Sky Sports, Liverpool midfielder Adam Lallana’s representatives have been approached by Leicester over the 31-year-old joining the Foxes in the summer.

The former Southampton player had been a bit-part player at Anfield in recent seasons, mostly due to injury problems of late. His contract is up on Merseyside and he seems highly unlikely to be offered fresh terms at the champions-elect. In fact, the Merseysider’s have reportedly given their blessing to the midfielder to discuss a move elsewhere.

Leicester head coach Brendan Rodgers is a big fan of Lallana, having signed the midfielder when Liverpool boss back in 2014. The Foxes are hoping to tie up a deal to prevent Lallana from agreeing to a pre-contract with a foreign club. The likes of West Ham and Arsenal are also believed to be interested in signing Lallana.

The Daily Star are reporting that Bayern Munich are set to renew their interest in signing Germany winger Leroy Sane. The report suggests that the Citizens would be willing to discuss the summer sale of Sane if the Bavarians allowed fellow winger Serge Gnabry to join as part of the deal.

Other media reports suggest that City would need to sell players if their two-year European ban sticks. The Citizens are not short of money, but the lack of revenue for two years from the Champions League would have a big impact on their finances, with the footballing authorities now monitoring their activity even closer than ever. Sane has missed much of the current season due to injury.

Will Adam Lallana be plying his trade at Leicester this season? 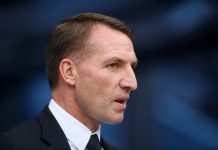