Last season Wolves returned to the Premier League with a bang, finishing seventh place after promotion and earning a spot in the preliminary stages of the Europa League.

Nuno Espirito Santo’s team kicked off their European campaign with a 2-0 defeat of Northern Irish outfit Crusaders on Thursday night in the second qualifying round.

Teams have suffered in the past

The victory over Crusaders means that the team from the Midlands have one foot in the play-off rounds of the competition. However, like many English teams who have played in the Europa League, there is a fear that their league form may suffer due to European commitments.

The likes of Burnley and Everton have secured seventh-place finishes, only to endured woeful league campaigns the following season. In fact, both teams were struggling at the bottom of the Premier League table for much of the next season.

Some would say that Wolves are better equipped to deal with the strains of European and league football than their predecessors.

Need to strengthen their squad

Wolves are not a club afraid to spend money in pursuit of success. They spent heavily last summer. This summer their only signings have been making loan players from last season permanent members of their squad, such as Raul Jimenez and Leandro Dendoncker joining on a permanent basis.

The likes of Helder Costa and Ivan Cavaleiro have also made loan moves to Championship clubs. An already small squad has become even smaller. Wolves have been linked with a number of players, including Moise Kean of Juventus and AC Milan’s young striker Patrick Cutrone, who is reportedly close to signing. No doubt they will make more additions before the transfer window shuts in a few weeks’ time.

Europa League may have an effect on Wolves

Wolves enjoyed a very good return to the Premier League. However, they were fortunate when it came to injuries, as they had their first-choice starting eleven basically available for the whole of the campaign. They may not be so lucky in the new season.

It seems unlikely that Wolves will be at the wrong end of the Premier League table next season. However, there is a big possibility that Europa League football could have an effect on the team and it may well spoil their chances of mounting a bid for the top six next season. 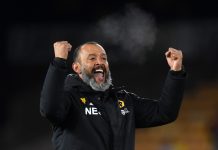 Wolves could not have asked for a better campaign