Real Betis have confirmed the signing of defender Martin Montoya from Barcelona.

The 24-year-old has moved to Real Betis on loan from Barcelona until the end of the season.

“Barcelona and Betis have reached an agreement for the loan of Martin Montoya until June 30, 2016, following the termination of the loan deal that had been due to run until the end of the season with Inter Milan,” an official statement said.

Montoya is Betis’ second signing of the transfer window following the arrival of midfielder Charly Musonda on loan from Chelsea. 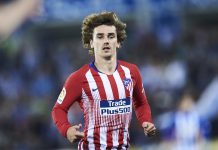